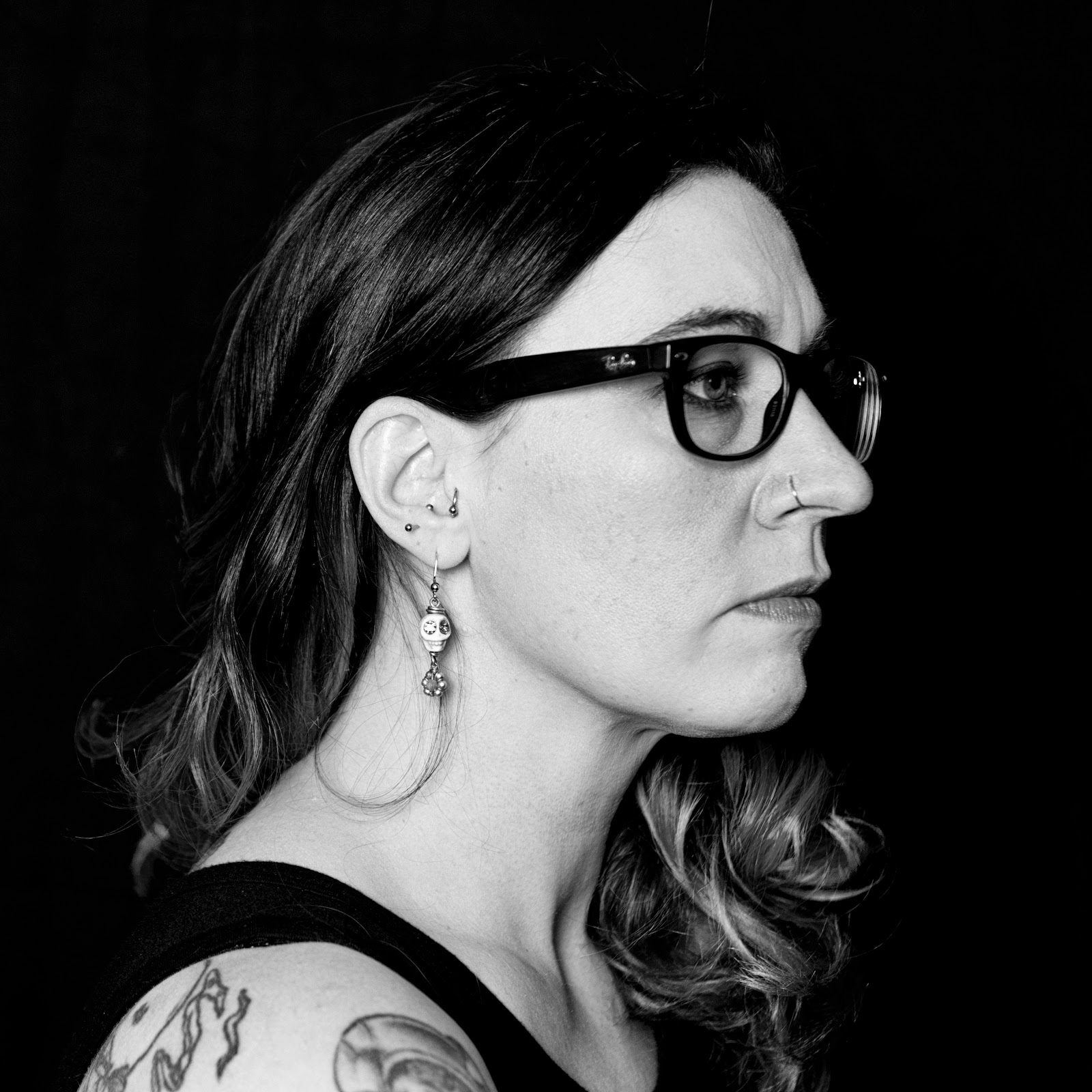 
Artist’s Statement
It’s funny.  Portraits of other people are a fairly new thing for me.  When I started taking pictures several years ago, I did a few self-portrait projects, they were good for me...they forced me to be creative and learn a lot about composition and how my camera worked.  Taking self-portraits is different, however, because the subject is yourself.  There’s no trust to be gained, no fear that you won’t portray the subject in a flattering way and violate some type of photographer/subject agreement. This show was a good exercise for me in capturing people and learning to trust that I was capable of doing it in a positive way.

Danielle approached me several months ago with an idea.  She wanted to do a series of portraits, but she wanted to take a different spin on them.  She wanted to make them double exposures.  We weren’t sure at first if this would be on film or composited in Photoshop, but we liked the idea and we started to brainstorm on subjects we’d like to use for the show.  We ultimately decided we wanted to showcase people who play different roles in the community.  These roles may be in education, small business, community service, the arts, or other areas. I started to approach people I knew and people I had just met and...asked to take their picture.  No one told me, “No,” and it allowed me to get to know some truly amazing people. 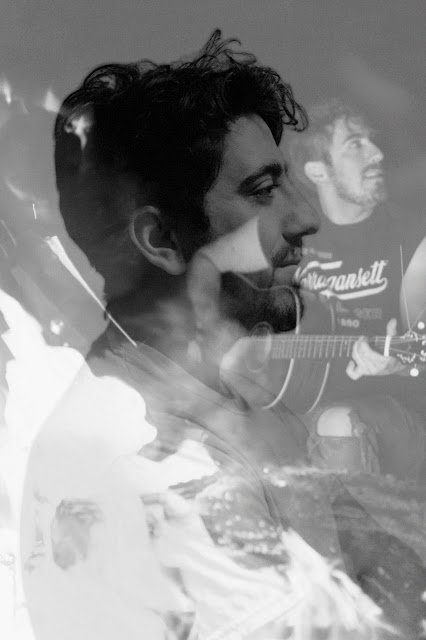 Ivan Christopher Christo
I met Ivan when I was photographing the Cabaret at Court Square Theatre for Skullhand Productions.  It was the first time I’d seen Tom, Hanks perform and I took some photos of Ivan backstage playing his accordion before the show. 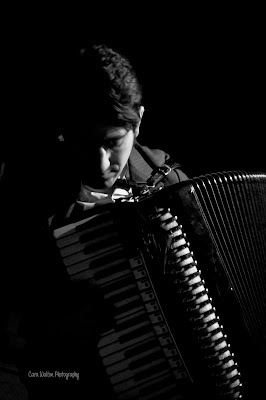 Ivan was actually the first person I photographed for this show.  I friended him on Facebook and went to his house one evening and took his portrait in his kitchen.  Another evening his band came over to his place for an evening rehearsal.  I spent several hours listening to and photographing them as they rehearsed around the fire pit in his backyard.  I also helped him fix his accordian.  It was a fun evening.

"I was born and mostly raised in Gloucester, Virginia.  I left VA for a while, but realized quickly how much of a perfect home it was for me.  In Harrisonburg, I was able to explore and foster my love of music.  Because the valley is so supportive of the, I’ve been involved in many bands, including Pelicanesis, Jaguardini, Tom Hanks, and Shagwüf. I’m pursuing a Masters in Elementary Education online while maintaining a healthy and active lifestyle in music to keep me sane.  Life is short and so is my attention span.” 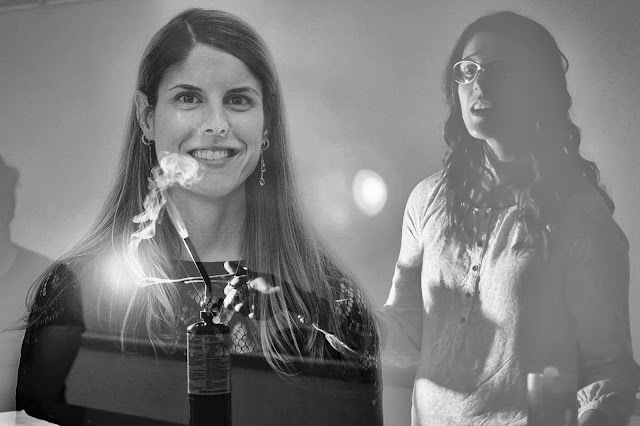 Kasey Hovermale
Kasey is a Chemistry teacher at the school where I also teach.  This past year I completed a photography project where I went into classrooms and photographed teachers...well...teaching.  Chemistry provided great visuals and it was a lot of fun getting to know Kasey better throughout the course of the school year. I always enjoyed “Fire Fridays” and my favorite part of the project was getting out of my office and getting to know more of my co-workers around the building.

‘I'm a JMU alumni and I've taught chemistry at HHS for eight years. I live in Grottoes and I love spending time with my family. I'm also a Pilates addict.” 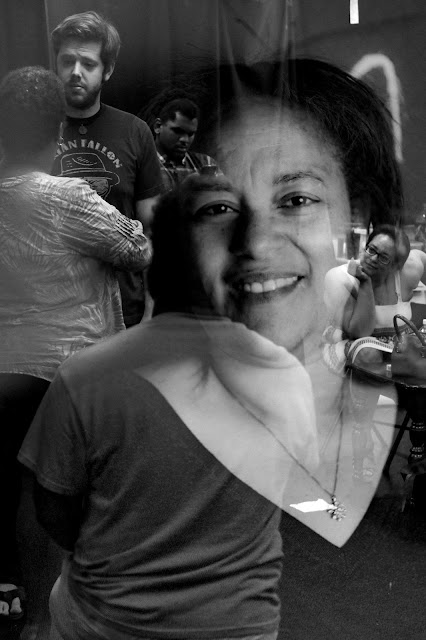 Leslie M. Scott-Jones
I met Leslie several years ago, gosh, I’m guessing almost ten years ago at this point.  I have always been impressed by her tenacity, creativity, and compassion.  Leslie is a Renaissance woman in the true sense of the word...she does everything and does it all well.  I photographed Leslie during rehearsals at Gorilla Theatre Productions in Charlottesville for a production of Cleopatra VII: An adaptation of Antony and Cleopatra which she adapted and was directing.

Bio
Leslie is a African-American southern woman from Virginia, encompassing all that entails. She studied theater education at VCU. She has been writing, acting and directing since her teens. Leslie hosted an internet radio show about relationships called Girlfriend to Girlfriend on SixEyes Radio at Blog Talk.com from 2012 to 2015. The world premiere of her first play Desire Moments was part of the 2014 Capital Fringe Festival. She has gone on to write several plays, novellas, and short stories. Book Ends, her first full length novel, hit the shelves Valentine’s Day Weekend 2016. She currently co-hosts Home Grown a radio show about local art, on 94.7 WPVC in Charlottesville, VA. Leslie has been active in community theater for over ten years, most recently directing her own adaptation of William Shakespeare’s Antony & Cleopatra, titled Cleopatra VII. She will appear in the Shenan Arts Production of Five Women Wearing the Same Dress by Alan Ball in September. She is a proud mother of two amazing children. Although she loves the excitement the city has to offer, she will always fancy herself a country girl at heart. Lloyd Bellerophon Scery
I met Lloyd for the first time while he was working at Pure Eats.  He probably doesn’t remember at all, but he was wearing a Dr. Who button and we ended up talking about our thoughts on Peter Capaldi as the new Doctor. The next time I met Lloyd, it was when I had an art opening at Pure Eats.  Lloyd was the assistant manager that evening and he did a wonderful job of making sure I was comfortable and we ended up having brief conversations throughout the evening.  Lloyd agreed to let me photograph him for the show.  I went to his place and, after discussing our mutual love of Roman history for several hours, I took his portrait in his kitchen.  I later went to work one night and took pictures of him as he went about his job.  Lloyd moved or Oregon recently and I am sorry that he is not here to see the show.

Bio
Lloyd was born in R.A.F. Lakenheathe in the UK, October 1987.  He moved to Herforst, Germany until 2000.  He has lived in eight states since then and is now in Oregon.  He likes video games and live streaming as well as reading and gardening.  He also likes riding his bike and learning languages.  He says his favorite color is grey, his lucky number is thirteen, that he's an ENTP and is very a cynical (expletive deleted). 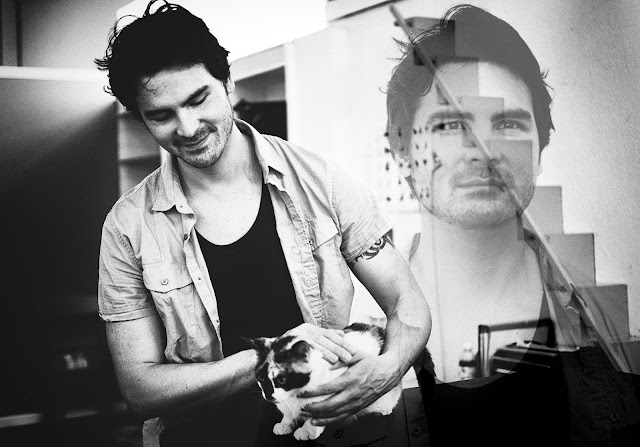 Matt Chan
This past April, my husband and I lost our beloved cat of 19.5 years, Meriem.  We decided that we wanted to adopt again and so we went to Cat’s Cradle, where we met Matt.  Matt was extremely helpful with the adoption process and, when he noticed that I had a photography email address, he asked if I’d be interested in helping out and taking photos for the organization.  I photographed Matt one afternoon when I went in to take pictures for Cat’s Cradle.  I’m really enjoying going in now, taking pictures, and getting to interact with the Cat’s Cradle community.

Bio
Matt Chan graduated from VCU with a Bachelor of Science degree in Mass Communications.  He began his career in animal welfare in 1999, has worked with the Charlottesville-Albemarle SPCA and the Augusta Regional SPCA, and currently serves as the Adoption & Volunteer Coordinator for Cat's Cradle in Harrisonburg, VA.  Matt also participates in the arts, and creates films for the Super Gr8 Festival in Harrisonburg as well as other short films.